In Korea, pedestrian crossing signals usually go like this:

Of course, red means, “Do not cross.” Green means, “Cross.” But, what does “Green (flashing)” signify?

I always thought it meant, “Hurry! Chop, chop! Let’s go!” Well, that is not incorrect. But more specifically (and more importantly perhaps), it means: “Do not start crossing.”

If a pedestrian starts to cross when the green light is flashing but is unable to fully cross in time (i.e., before the light turns red), that person will not protected as a “pedestrian” (보행자) under Korean law.

Please read Article 3(2)6 of the Act on Special Cases Concerning the Settlement of Traffic Accidents (교통사고처리특례법) or Article 27.1 of the Road Traffic Act (도로교통법). If you’d like to learn more, please refer to the Korean Supreme Court Decision of October 9, 2001, 2001Do2939.

Hmm… Not protected as a “pedestrian?” Meaning what? Answer: Should he/she be hit by a motor vehicle while crossing, the perpetrating motorist (if insured) will not face criminal liability. (Note: The motorist could, of course, face civil/tort liability.)

Nevertheless, a perpetrating motorist (even if insured) could always face criminal liability under two special circumstances:

FYI: In Korean, “횡단보도” means “crosswalk,” while “무단횡단” means “jaywalking.” In law, we use the term “점멸” to say “flashing” (as in signals). The Chinese characters are: “點滅.” 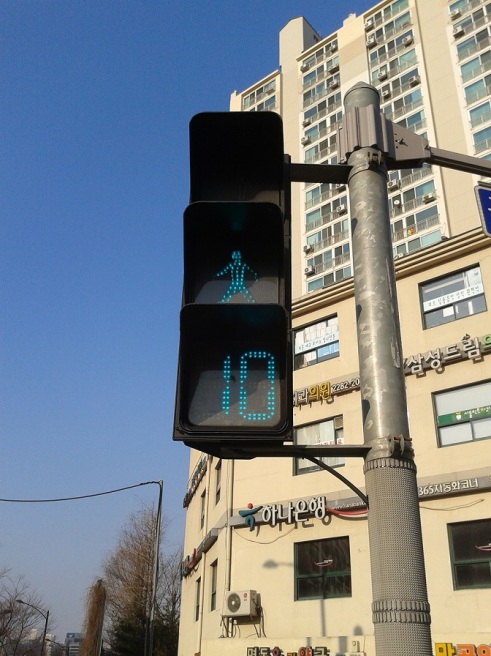 According to the Act on Special Cases Concerning the Settlement of Traffic Accidents, an insured motorist (involved in a traffic accident) will not (normally) face prosecution. However, this does not apply to traffic accidents arising out of the following traffic violations:

1) Violation of traffic a signal/sign, or

4) Unlawful overtaking or lane change, or

6) Failure to protect a “pedestrian” in a crosswalk, or

8) Driving while intoxicated (aka drunk driving), or

9) Intruding upon a “pedestrian zone,” or

10) Starting to drive before a passenger has safely disembarked, or

11) Failure to drive “safely” within the “child protection zone.”

All Other Accidents: No Criminal Liability

So, an insured motorist involved in a traffic accident not falling under any of the aforementioned scenarios will not face criminal liability (in Korea). Such an act would, in principle, constitute the crime of “Bodily Injury/Death by Occupational Negligence” (업무상 과실치사상) under the Criminal Act (형법). But here, the Act on Special Cases Concerning the Settlement of Traffic Accidents (referred to as “the Act” below) takes precedence.

In Korea, when a special law comes into force, it takes precedence over all other general laws. The Criminal Act, a general law by design, functions as a “catch-all” law, so to speak.

With the exception of the aforementioned scenarios (11+2), the motorist cannot be indicted (i.e., face criminal liability). In a way, the Act aims to “protect” the motorist, at least, in case of relatively “minor” traffic accidents, provided he/she is insured.

The Issue of Settlement (합의)

So, is there any point (criminally) in reaching a “settlement” in case of the 11 egregious violations (+ hit and runs, and/or infliction of “aggravated bodily injury”)? The answer is, “Yes.”

A settlement, in itself, will not prevent the perpetrating motorist from being indicted. What it can/will do, however, is allow the perpetrating motorist to receive less severe criminal punishment (i.e., avoid actual prison time). If a settlement is reached and submitted, the court will take it into account, and the motorist will most likely end up with probation (집행유예) or even a criminal fine (벌금). This is critical. Not “physically” ending up in jail.

A few days ago, a district court in Ulsan rendered a (tort case) decision which found a badly injured jaywalker 50% responsible. The court did find for the plaintiff (jaywalker), but limited the damages to 17 million won. The plaintiff was hit by a motor vehicle while crossing against a red light (i.e., contributory negligence).

On a personal note, I don’t like to jaywalk. Not only could I get a ticket of up to KRW 30,000, I could also end up badly hurt. For me, it seemed to be habit-forming, and very few things were actually that urgent. All it really takes is one mishap.

I also recently decided to stop walking with earphones. I’d heard numerous news reports of how dangerous it could be. So one day, I threw away my old iPod because I would keep using it while walking. That, too, was habit-forming.

Below is a police banner urging pedestrians not to jaywalk.

In October of last year, a Korean district court held that back-seat passengers (of taxis) who fail to buckle up are 5% responsible (in case of injury suffered due to traffic accident).

In Korea, bicycles must be dragged/walked (i.e., not ridden) when using a crosswalk.