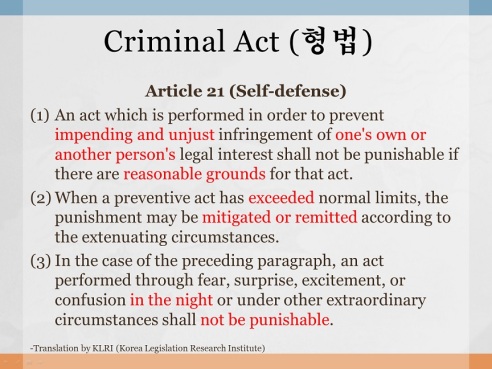 It’s 5:00 a.m., and Ms. Park (age 33) is sound asleep at home where she lives with her fiancé, Mr. Yang (age 36). Mr. Yang is also asleep, but in another room. All is quiet until Corporal Jang (age 20; drunk soldier on leave) breaks into the couple’s home. He proceeds to grab a knife in the kitchen and threatens Ms. Park who is alone in the room. He eventually kills her, stabbing her more than 10 times. Ms. Park’s dying scream wakes Mr. Yang in the other room. Mr. Yang confronts Corporal Jang. They get into a scuffle. With the knife, Corporal Jang is able to injure Mr. Yang in the forehead and hand. Mr. Yang finally manages to pry away the knife. He uses it to stab Corporal Jang in the neck and back. Corporal Jang is dead. Q: Can Mr. Yang invoke self-defense under Korean law?

The above example situation is very similar to a case recently reported here in Korea. (The actual events took place in Gongneung-dong Seoul, last September.) On December 9th, the Nowon Police Department ended their investigation and handed over the case to the prosecution. In short, they concluded that Mr. Yang’s actions amounted to self-defense. This was/is big news here in Korea because self-defense is interpreted very narrowly. In fact, this was the first case in 25 years where killing another person was actually recognized as self-defense (by the police).

There were two diametrically opposed theories to this case. The first being, basically the example situation. This theory suggested Corporal Jang was desiring to have sex at all costs before returning to camp.

The other theory was that Mr. Yang had killed both his fiancée and Corporal Jang. But what was Corporal Jang doing there? This theory suggested Jang went in only after he heard a scream coming from inside.

The latter theory has been discredited by police investigation. According to the police: DNA evidence, polygraphs, witness accounts, and cell phone records all debunk this theory. FYI, this theory was largely raised by an SBS TV program called Curious Stories Y. (I tried to rewatch the episode originally broadcast on October 9th, but interestingly only that episode was/is unavailable.) There is only a fine line between a good hunch and tunnel vision. We need not look far. Recently when a brick fell onto a lady feeding stray cats, many assumed it was a hate crime.

DID YOU KNOW? Gongneung-dong is in the northeastern part of Seoul. We still use the term “dong” (동) to reference areas. I have a close friend who lives around Gongneung-dong. He got married not too long ago.

III. Implications: A Step in the Right Direction

This case does not mean you can now stab to death any intruder (in Korea). I’d say this case just barely passed the self-defense requirement. Had Corporal Jang been unarmed or Ms. Park (and Mr. Yang himself) unharmed, I’m not so sure self-defense would have been recognized. Also, had the intruder been a woman or someone relatively small, the outcome might have been different. The police/court will gauge whether you really needed to stab (to death) the intruder.

I would like to express my condolences to the victims and their families.