In Korea, the Supreme Court recently affirmed an appellate court decision which had found a woman not guilty of defamation. She had impersonated her ex boyfriend’s current girlfriend (i.e., the victim) online. Basically, she downloaded a dating app and set up an account using the victim’s basic info and photo (she found online). She then used the account to approach men and give out the victim’s phone number.

Reasoning: The woman’s actions did not amount to being an allegation. An allegation is essentially “reporting” (that someone did something), whereas her actions were more the “doing” (itself). The tricky part was that, in effect, she was trying to paint the victim in a negative light. The effect could/would have been the same as defaming.

Note 1: In this case, the prosecution resorted to (cyber) defamation probably because there’s currently no criminal law in Korea that punishes (online) impersonation itself. (If you impersonate someone in order to defraud, that’d be fraud. Or, if you use another person’s Resident/Alien Registration Number, that can be criminal too.) The only legal recourse in this case would be to sue the woman for psychological pain and suffering + ask the app company to delete the fake account.

Meanwhile, online name-calling (w/o justification) is also a crime in Korea. But unlike defamation crimes, this crime called “Insult” (모욕) deals with opinion, not allegations. So, something like the below could qualify. (An e-sports commentator was fired during an event recently by the head of Valve Corporation.) It could be defamation maybe if Gabe Newell wanted to convey that James was literally an animal, not human. 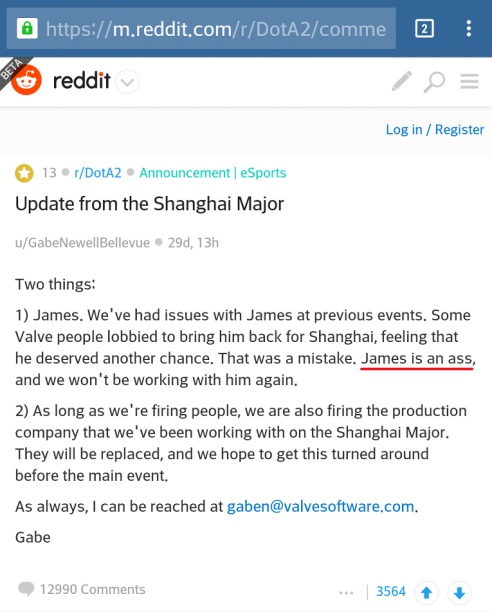