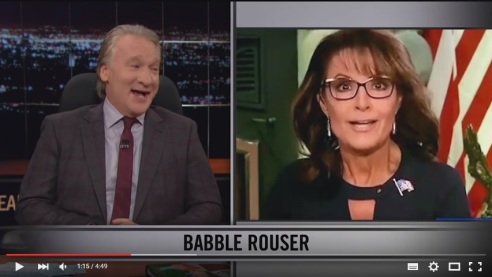 In Korea, publicly insulting another person (w/o justification) is a crime. So the following type of comedic segment would not be possible here.

Bill Maher: “Now that many Republicans have come forward in the last week to finally admit that ‘okay you were right; Sarah Palin is a crazy person,’ they have to ask themselves what else might I have been completely wrong about all these years. Now in case you missed it, Palin made a speech in Iowa a couple of weeks ago that cryptologists are still working on. And which I had been holding off on discussing on the outside chance it might be brilliant in some other language. Let’s look at a few moments, shall we, to see for oursleves what prompted conservatives to finally throw Sarah Palin under the bus.”

Bill Maher: “Boy, that really brings me back to the 80s when you’d get a chick back to your apartment to do coke, and she’d do too much and start rambling, and you’d think boy, I have made a huge mistake here…”

I think the biggest problem with the crime of “Insult” (모욕) is that it’s too vague what exactly constitutes a crime when. Recently, the Seoul Southern District Court overturned a lower court decision which had found a professor guilty of insulting a social commentator. (During a podcast, the professor had referred to the commentator as a “wacko.”) The court basically reasoned that the term was one which a public figure could put up with. To learn more about this crime, click here. Thanks!