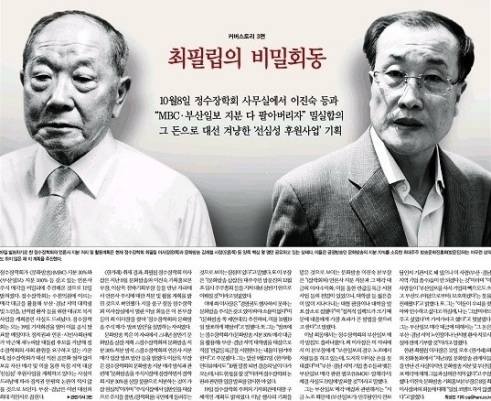 The Supreme Court of Korea recently affirmed an appellate court decision which had found a reporter guilty of eavesdropping + secretly recording + reporting a private conversation between three people (back in October 2012). The reporter was sentenced to 6 months in prison but received a deferred sentence. This means the crime will be expunged from his criminal record if he is able to keep his nose clean for 2 years.

The Court ruled that the acts of eavesdropping, recording, and reporting were each crimes under Korean law. And that the subject-matter was not really worthy/grave enough to be excused under the “Justifiable Act” (정당행위) defense. Also, the fact that the reporter stumbled upon the conversation did not make any difference. He should have stopped listening as soon as he realized a private conversation was taking place.

Article 3 (Protection of Secrets of Communications and Conversation)

(1) No person shall censor any mail, wiretap any telecommunications, provide communication confirmation data, record or listen to any conversation between others that are not made public, without recourse to this Act, the Criminal Procedure Act or the Military Court Act…

(1) Any of the following persons shall be punished by imprisonment with labor for not less than 1 year but not more than 10 years + by suspension of qualification for not more than 5 years:

1. A person who has censored any mail, wiretapped any telecommunications or recorded or eavesdropped on any conversations between other individuals in violation of the provisions of Article 3;

2. A person who has disclosed or divulged the contents of communications or conversations he/she has learned in a manner referred to in subparagraph 1.