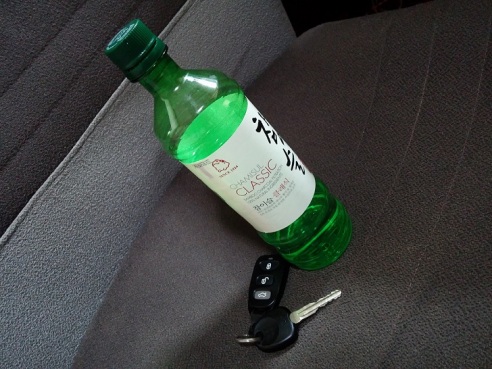 Driving with a blood alcohol content (BAC) of 0.05% or higher constitutes drunk driving in Korea. It takes around three shots of soju for an adult to attain a BAC of 0.05%. The criminal punishment for drunk driving is imprisonment for not more than 3 years or a (criminal) fine not exceeding 10 million won. At the same time, the offender’s driver’s license will either be revoked or suspended for a period of time.

If one chooses to fight/dispute the breathalyzer test result, some factors for consideration are:

1) Before taking the official breath sample, did the police officer allow the driver to gargle (w/ water)?

2) In iffy cases where the first breathalyzer test result was just slightly over 0.05%, was the second/third breath sample taken using a different straw?

3) In cases where the breathalyzer test was conducted much later to the time of driving, was the BAC estimate properly calculated in accordance with the Widmark formula?

The Widmark formula is a formula that “retro-estimates” the BAC of the driver at the time of driving based on factors such as gender, height, weight, and time elapsed since consumption of alcohol. At any rate, it is vital that all of these factors are taken into account, and the estimate chosen is the one most favorable to the driver. Botch-ups can/will allow the driver to contest the result.

Since January 24, 2011, Korean drunk driving laws still apply when driving in areas not defined as “road” under the Korean Road Traffic Act (도로교통법). These areas include parking lots, school grounds, and even areas within apartment compounds that are separated by vehicle entry points.

In discussing drunk driving, the crime of “Failure to Comply with Sobriety Test” (음주측정불응) should also be mentioned. Although they often go hand in hand, the two are separate crimes. For instance, even if a driver is later found to have a BAC below 0.05%, that driver can still be punished for “Failure to Comply with Sobriety Test” if he/she had initially refused to take a breathalyzer test without “justifiable reason.” FYI, one recognized example of “justifiable reason” is highly unstable breathing as a result of bodily injury.

A driver who refuses to take a breathalyzer test without “justifiable reason” may be arrested without a warrant. But even in such case, the Miranda warning must be read. Failure to do so constitutes an illegal arrest. This means:

1) Any subsequent refusal to take a breathalyzer test will not constitute a crime, and

2) All breath/blood samples subsequently provided will not be admissible as evidence in a court of law.